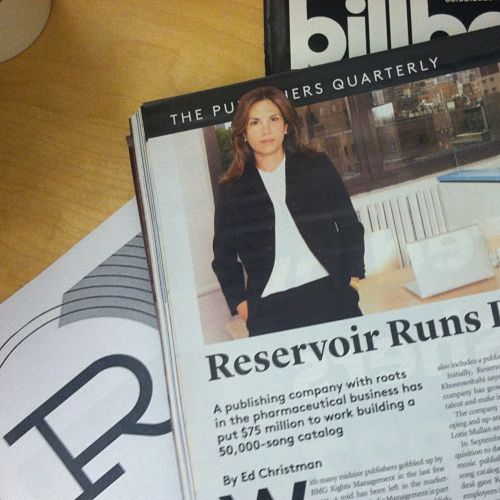 In the piece, which is online and running in print now, Reservoir President Golnar Khosrowshahi and Chief Operating Officer Rell Lafargue speak about Reservoir as an entity, from its Canadian roots to its Europe-facing plans for the future.

“Our goal is to become the no. 1 indie publisher”, Khosrowshahi is quoted as saying at one point.  Lafargue spoke to the company’s day-to-day priorities, including releasing new music from Philly Groove Records and working with international sub-publishers.

Read the entire piece below and on billboard.biz.

With many midsize publishers gobbled up by BMG Rights Management in the last few years, a void has been left in the marketplace. Reservoir Media Management is part of a new group of up-and-coming publishing firms moving to fill it.

The firm launched in 2007 as part of a diversification move by DRI Capital, an investment firm that specializes in the income streams of pharmaceutical drug patents. DRI was acquired by the Khosrowshahi family in 2002 after it sold its Future Shop electronics chain to Best Buy.

Why music? Since Toronto-based DRI was doing well with its investments in drug patents, its appetite for intellectual property grew. After looking into TV, film and books it settled on music publishing, which produced a steady income stream.

Some “thought we were heading the wrong way, considering the declining music sales,” Khosrowshahi says. But the more Khosrowshahi’s team analyzed it, the more it seemed like the right investment, and the publishing royalties business was of a known quality to the Wall Street investment community thanks to other firms like ole, Imagem, Bug Music and Evergreen Copyrights. DRI, with $3 billion in assets under management, took the plunge.

As it was acquiring the songs of Roberts, Vicky McGehee and both halves of the Big & Rich songwriting team (John Rich and Kenny Alphin), the company set up its systems and infrastructure, using customized Counterpoint royalty stems and leveraging the DRI accounting systems. The next year, Reservoir acquired TVT’s publishing catalog, which brought aboard Rell Lafargue, now its COO.

“Our short-term mandate is to grow quite rapidly over the course of the next couple of years,” Khosrowshahi says. “We have an infrastructure that can sustain the addition of tens of thousands of copyrights, and we want to exploit that infrastructure. Benefits happen when you grow to a certain scale.”

Among its acquisitions is the Danja catalog, which contains some 500 songs including about 12 No. 1s, according to Lafargue. The deal also includes a publishing stake in future Danja songs.

Initially, Reservoir was “shy about future deals,” Khosrowshahi says. “We wanted less risk” — but as the company has grown, it’s become equipped to analyze talent and make informed decisions on future deals.

The company also now has the ability to serve developing and up-and-coming songwriters like Phil Bentley, Lotte Mullan and Mø.

In September 2012, Reservoir made its biggest acquisition to date, buying Reverb Music, the U.K.-based music publishing company that possesses a 40,000-song catalog and about 100 songwriter contracts. The deal gave Reservoir a U.K. base, and kept six Reverb employees in London. “The strategy is not for Reservoir to focus on the U.S. and the Reverb people to focus on the U.K. It’s for all of us to look at the U.S. and Europe as one giant territory,” Lafargue says. “Our cross-border arrangements have really been coming together.”

The Reverb deal made it possible for the next Reservoir acquisition: the London-based P&P Songs, which gave Reservoir another 3,000-4,000 titles after its February acquisition. Thanks to its London office, Reservoir knows what’s available for purchase and can target such catalogs and fold them into the company’s existing operations, Lafargue says.

As for the international marketplace, instead of signing with a major, Reservoir chose to set up subpublishers in each market. “We went to each major territory and found the best partner that we could,” Lafargue says. Its lineup of subpublishers: Basement Music (Brazil), Roba (Germany, Austria, Switzerland and the former Eastern Bloc countries), Cafe Concerto (Italy), Clippers Music (Spain, Portugal), Talpa Music (Belgium, the Netherlands and Luxembourg), Mushroom (Australia, New Zealand), Sony/ATV (France, Japan), Stereoscope Music (Scandinavia) and Active Music (South Africa).

The company recently stepped beyond music publishing to buy the master recordings of the Philly Groove label, which includes the Delfonics’ catalog. “So now we are in the masters business,” Lafargue says. “We are relaunching the label, including rereleasing the catalog.” That includes remixed and reimagined tracks courtesy of current producers. Reservoir is also opening up the Philly Groove catalog for sampling, he adds.

“The investment strategy has always been to build and diversify, Khosrowshahi says. “We know where the holes are and where to beef it up… Our goal is to become the No. 1 indie publisher out there as far as revenue and service go, and we want to be the best.”